Pipe Bombs from The Right - Antifa Mans the Wall 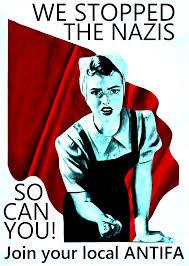 Vermont, 10/24/18 -Major news sources are reporting that pipe bombs have been sent to a multitude of political targets including former U.S. Senator Hillary Clinton-Democrat, Democratic-leaning billionaire George Soros, CNN (who has been critical of Donald Trump), former Vice President Joe Biden-Democrat, and former U.S. President Barack Obama-Democrat. This represents an escalation of political violence by growing factions of the U.S. Extreme Right.

While these targets are not reliable allies of the Left (let alone Organized Labor), they are (inaccurately) viewed by the Far Right as being such. Therefore the Left needs to understand this as an escalation of violence against us by the enemies of democracy. For this, we, the Left, need to be prepared to meet such challenges, and we need to be able and ready to respond as may prove effective and appropriate.

Over the last two years, overt Fascists, embolden by the Trump Presidency (who counts on the violent Far Right as an essential aspect of its core support), have engaged in bloody street actions in numerous cities from Charlottesville to Berkley. This rise of street level Fascist activity is being driven, in part, by the extremist rhetoric emanating from the White House. While Trump is a sloppy and buffoonish man (elected to office even though he received three million less votes than his main Capitalist challenger in 2016), he has repeatedly disparaged minorities, immigrants, women, disabled, and the Labor Movement in crude and inflammatory terms. More recently he has begun to openly refer to himself as a Nationalist (all the while verbally attacking more Social-Democratic nations while giving praise to authoritarian regimes); all sentiments shared in common with Fascist world view.

In this political climate, the only thing that prevented street level neo-Nazis (and extremist anti-Labor Trump supporters) from effectively occupying sections of the cities they have marched upon, has been effective counter attacks organized by Antifa/Black Bloc contingents. It has been Antifa, not politicians and not pacifists, who have given neo-Nazis something to fear and a reason to pause. And more often than not, when neo-Nazis and Antifa have met in the streets, it has been Antifa who has come out on top.

History has shown us that when Fascists escalate their violence (even when they represent a relatively small minority of a population), when they are able to openly take to the streets without being physically countered, it is a small step for them to seize more aspects of State power [i.e. Italy in the 1920s, and Germany in the 1930s]. History also shows us the effective means to defeat them is not through education or elections alone, but rather through force [The Battle of Cable Street in England in the 1930s being one example]. And in the end it was not peaceful sit-ins that defeated Nazi Germany; rather it was men like my Grandfather and his brothers who served in the Army and met Nazi force with a more determined Anti-Fascist force.

If we were to allow Fascists to control the streets and to openly operate and dominate in our communities, let us soberly recognize that the consequences would be an inability to conduct effective Labor organizing (as free Labor Unions are antithetical to Fascism), and an inability to openly organize towards Socialist, Anarchist, or Leftist goals (such as towards livable wages, paid family medical leave, civil rights, expanded democratic processes, etc.). In such a reality, instead of workplace organizing we would see an intensification of extra-legal attacks on minorities, Labor leaders, and on the very institutions that (at our best) mark us as a democratic society.

Already, The Administration in Washington has built internment camps on our southern boarder where they have caged children. Already we have seen a desire from political figures on the Right to outlaw or criminalize political protests. Already our Unions have come under existential attack by judges who have been appointed by Trump and other Rightists to carry out this exact mission. Soon we will see the further erosion of a woman’s right to control her own body. And yes, we have also seen the President of the United States call on extremist elements from within his base to attack those who would oppose him. And the Fascists have answered this call. And today they have now begun to send bombs to targets which they view as being aligned with the Left.

An election is just weeks away. Nationally, the Democrats (who are largely a Capitalist party with a minority of Social-Democrats within their ranks) are poised to take the U.S. House of Representatives. The Democrats are more desirable (or less reprehensible) than Trump’s Republican Party, but do not be foolish enough to think for a moment that this Party understands how to fight Fascism (such an understanding apparently died with FDR), or that they have a true intent in taking power from the wealthy elite (who fund their national campaigns) in order to empower the people. They do not. While a victory for the Democrats may weaken Trump (which is good), we have seen what this Party does when it has full control of both Houses of Congress and the White House (as they did at the start of the Obama Administration); minimum wage remained appallingly low, publically funded healthcare never materialized, card check recognition for Unions went nowhere, and we continued to engage in imperialistic foreign military campaigns. So while we may desire a Democratic victory in November, if for no other reason than to blacken the eye of the more reactionary Republican Party, do not expect any wave of change. But do expect street level Fascists to continue to escalate their attacks on the Left. And what will stand between them and a very disturbing future will remain Antifa.