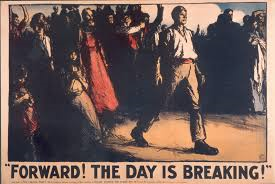 Montpelier, VT, October 2003 –There are perhaps one or two moments in an individual’s life where they find themselves immersed in what rightly can be considered an historical moment; a moment where their very own decision to act or not to act may determine the future outcome of not only their immediate surroundings, but that of an entire people, and history itself.[1] It is just such a position that the workers of the Vermont city of Montpelier find themselves in today.

For more than three months a union drive has been underway in Vermont’s capitol. However, this union drive is not the kind that we have come to expect. Instead of targeting a single factory, or business, the goal, from the onset, has been to organize the entire city into a general union of workers. This has not been remotely attempted in North America in many generations. This project was initiated by area employees, the Vermont Workers’ Center, and the United Electrical, Radio, and Machine Workers of America (of whom the Hunger Mountain employees are members), and has been carried forth by a volunteer organizing committee of rank & file workers from dozens of distinct city shops. To date [10/25/03] management at Charlie O’s tavern has said that they will voluntarily recognize the union.[2] Also, recognition at the Savory Theater is looming. Workers at La Pizzeria, Karma Imports, and State Street Market are organizing and have requested recognition. At J. Morgan’s (a restaurant that employs more than 40 people) a majority of workers have come forth in support of the union. Thus far J. Morgan’s management has refused to recognize the union and has created an atmosphere of fear and intimidation on the shop floor. Management beware! Union busting will not be tolerated in our community!

What does the unionization of Montpelier mean for the city’s workers?

With a union, workers will receive a contract through which they can attain job security (bosses will no longer be empowered to fire people without just cause, and bosses will be forced to follow an agreed procedure if they seek such action), increased wages and/or a guarantee that wages will not be cut (the union seeks to gain fair wage increases for all, and has the goal of winning an eventual livable wage), and with the organization of the union workers will have a legitimate chance of winning decent benefits (i.e. medical coverage). However, more importantly than these concreate gains, the unionization of Montpelier will result in the expansion of democracy in that workers will now have a citywide organization through which they will be able to meet and discuss all pressing issues that affect them on a local, national, or even international level. They will be in direct possession of a democratic organization that has the capacity to take a position, and to take action, in the interests of the Montpelier and Vermont working class, and other laborers (wherever they may be) whenever such acts of solidarity and mutual aid are shown to be both desirable and necessary. For example, if the city or state government was to enact laws or regulations that are counter to the interests of working families, or conversely, if resolutions from Town Meeting Day are not enacted by the related authorities, the workers will now be able to call for a meeting of representatives from each city shop. At such a meeting they, through a democratic decision making process, will be able to organize the united response of all city employees. Such united and organized action, regardless of the particularities that such will ultimately entail, will result in the applying of a strong and united pressure on those who seek to block or manipulate the will of the people. After all, it is the workers who make Montpelier and Vermont as a whole function; it is they who, among many other things, clean the offices, work the cash registers, count inventory, serve and cook the food, provide childcare, maintain the roads, construct buildings, give medical care, and mill the lumber. If the workers build such a strong and democratic organization through which their common interests, visions, and goals can be articulated by a united voice, backed by a commitment to action, then they will be in a position whereby they can put the agenda of the common Vermonter first. The laboring classes make Montpelier function and if united they, at will, can decide otherwise! There is power in labor!

Let us be clear about something: Montpelier could be just a beginning. After this campaign has won citywide recognition, other Vermont towns may follow its example. And if the workers of such towns (both large and small) come together into strong organizations, and as these organizations build strong ties between each other, the Vermont working class as a whole would no longer be at the heels of politicians who have to answer to the bosses (be them the IBM CEOs or out-of-state logging interests). If this time comes, these strong and democratic organizations of various city and town workers, in collaboration with farmer’s organizations such as the Dairy Farmers of Vermont, and taking into account the general will as organized through the more than 200 Town Meetings, would now be in a position to put forth a united and legitimate voice of all these working persons who make Vermont what it is! We will win!

And again, as goes Vermont, other regions in North America could follow. For if we, as working Vermonters, can show people that it is possible to band together to receive a wage that one can live a dignified life by, and as it is demonstrated that democracy does not start and stop in a voting booth, but that it is a real everyday practice of workers which must me won and protected by our own collective efforts, then we can rightly say to our natural allies across the continent and beyond that “we stand in solidarity with your particular struggles, and we offer you a proved model that you too can utilize for your own empowerment.”

The question that every worker in Montpelier must be prepared to answer is ‘which side was I on when we, together, stood at the historical crossroads of class struggle? Did I stand with my fellow workers, and therefore strive towards the further democratization of my community, or did I fall back in line, into the stagnate waters of the status quo? Did I take part in the historic emergence of an empowered working class, or did I support the poverty wages and dictatorial control of the bosses, the wealthy, the big money politicians, and all those who would seek the stifling of real everyday democracy?’ Just as our ancestors who rebelled against the tyranny of British imperialism had to decide which side they were on, so too must we. To support the union is to support further democracy. To support the bosses who are against the union is to support the status quo which feeds us on poverty wages and keeps us tethered to a political machine which is fed by little more than capital. In the spirit of the Green Mountain Boys, and with the goal of democracy and social justice, the Green Mountain Anarchist Collective calls on all fellow workers to step forth into the light of history and seize the opportunity that the moment holds! Union Yes!

[1] This essay was originally printed as a handbill by the Green Mountain Anarchist Collective and distributed to workers in Montpelier, Vermont. It was also published in Catamount Tavern News, 2003. The first draft of the essay was written by David Van Deusen but was reviewed, modified, improved, and adopted by the Green Mountain Anarchist Collective. The campaign lasted into 2005, but ultimately the effort was not sustained. To understand some of the factors that contributed to the decline of this effort see, Precarious & Pissed Off, by Sean West, 2006, https://theanarchistlibrary.org/library/sean-west-green-mountain-anarchist-collective-precarious-pissed-off.

[2] They did not, and recognition was never achieved there.