Analysing human societies as complex systems can provide an insight into historical processes and the strengths and weaknesses of capitalism. 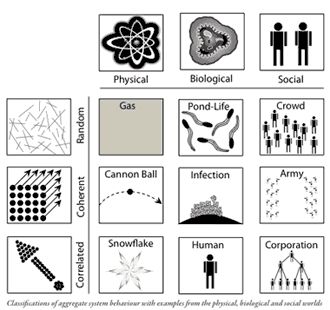 Traditional physics has attempted to find fundamental laws at the smallest granularity possible. However, it is now known that because of the nature of interactions at very detailed granularity, it can be computationally intractable to predict behaviour of aggregate systems. Water, for instance, is best described (under most conditions) with fluid flow equations which describe aggregate behaviour with relatively simple (non-linear) equations. Attempting to describe it as an aggregate wave function of 1026 interacting quantum particles is not computationally feasible. Instead complex systems theory attempts to describe systems at a natural granularity that allows for tractable prediction of behaviour.

One of the fundamental notions in complex systems is that of emergent behaviour. That is, from a system with a large number of actors with simple rules, can emerge complex behaviour. This is an echo of the notion of a metasystem transition which was expressed by the cyberneticists [1]. Some of the earliest descriptions of emergent behaviour actually come out of the Austrian school of economics and can be seen in the writings of Ludwig von Mises, where he describes the aggregate behaviour of capitalism as a type of optimisation which arises as a result of the self-interest of the actors [2].

There are a number of rules-of-thumb that systems theory gives us as tools of analysis for understanding actors and the emergence of aggregate actors [3]. If you have a simple system interacting with a complex environment, it will have a low probability of maintaining its identity, that is, its internal structural integrity. Complex systems can interact with a complex environment in such a way that they have a higher probability of survival. We see that simple organisms in nature often have a strategy of massive reproduction because of the low likelihood of survival, which is in contrast to the method used by humans.

In order to understand how societies can be modelled by systems theory it is instructive to look at some simple examples. In feudal Europe the organisation of society was exceptionally hierarchical. This is modeled in systems theory by a sort of control graph, which is a tree, with the lord at the top and his immediate vassals below him. In this structure it was possible to approximate, in many circumstances, control over a group of people with control over the leader of the hierarchy. This has a large number of consequences. If the behaviour of the system can be modeled by behaviour of the lord, then the system can not act in ways more complex than the lord. Because of this, the system remains simple. It also means that the system can easily act coherently. It is capable of leading armies, and interacting with other feudal states in simple ways.

In reality no perfect control hierarchies exist. There will always be lateral control links, various types of conspiratorial actions etc. However, for feudalism this model often remains a good approximation.As we move through history to early capitalism we start seeing a move towards more “hybrid” models of control, where many more lateral links exist and the system takes on the possibility of evolving more decentralised, more complex behaviours. In addition, it becomes less brittle. One might conjecture that feudalism was in some sense doomed when capitalism arose because the environment of interaction became too complex.

The modern world has moved to a highly interconnected network-model capitalism. This is almost the antithesis of feudalism within the framework of the connectivity of the model.It is important to note a few things about the network model. Networks can have vary different internal structure. A large amount of interconnectedness does not rule out particular internal patterns, in fact we know that many complex systems, including social networks, don’t have “random” graph structures. This internal structure can have big effects on emergent behaviour. All networks are not the same.

In addition, the emergent behaviour of the system is strongly dependent on the interaction paradigm of the actors. The current economic system is a result of the paradigm of capitalist social relations. There is nothing “naturalistic” about the emergence of capitalism from these social relationships. It’s a bi-product of person to person social institutions.The atomisation of actors is arbitrary. It is actually often the case that systems can be re- atomised into a different notion of actor or communication. A good example of this is class politics. The analytical framework of the state, the bourgeoisie and the working class reifies entities and their interactions in ways that are easier to analyse then the mass interactions. This gives a mechanism for feasible reasoning about economics. This is in stark contrast to the obliteration of class dynamics that occurs in the intellectual framework of neoclassical economics.

The aggregate behaviour of systems in terms of their control behaviour is something which can be very instructive to anarchists when thinking about how anarchism relates to the rest of the social environment. Idealised hierarchies can be modeled by their controlling entity. These aggregates are capable of what is known as “coherent” activity. Armies provide a good example of these types of systems. They can move in orchestrated blocks. However, the notional objectives which can be achieved with coherent systems must admit simple descriptions. Genocide, for instance, can be simply described and would be a description that one can expect an army to carry out. “Set up democracy in Iraq” however is something which an army has no capacity to do.

Democratic states and large corporations often fit more closely into the realm of the hybrid model hierarchy. These systems are starting to show system behaviour more complex then that of an individual actor. The behaviour that they engage in is becoming less strongly “coherent” and more “correlated”. You can’t expect things to move in lock step, but the system will move with a general correlated direction. You can also expect that some hybrids will be able to cope with a more complex environment than even a single actor might be able to cope with.

Finally in a networked system, where there is little or no notion of hierarchy, there is a possibility for truly complex emergent behaviour. Some types of systems which exhibit this are the human organism and social networks.

The state, being a fairly hierarchical creature, would like to make things function coherently. However its greatest weakness is its incapacity to find solutions to problem descriptions of large complexity. As an example militaries and states are finding it increasingly impossible to deal with the emergence of guerrilla warfare and terrorism. The models of organisation used in these social structures are highly decentralised and highly non-hierarchical. In the end, the state has little chance of eradicating such movements. The state must find simple descriptions of objectives and is at a fundamental disadvantage because of the more limited capacity to deal with complexity.Capitalism and corporate globalisation however are fearsome beasts. The internal model is highly networked. These creatures move across state boundaries with great agility. They have emergent behaviour which is ridiculously complex. Nobody even understands how the stock market functions (or dysfunctions). Capitalism is also incredibly robust, being able to adapt to circumstances in ways that Marx would have never thought possible. The only chance of combating an enemy of this type is with one of at least equal complexity.

The global behaviour and properties of complex systems are dependent on the interaction regime of the individuals. With human interactions there is a possibility of a feedback cycle that actually drives fundamental changes at the level of actor communication. This means that extreme changes in global behaviour are possible. Revolution is the radical modification of the emergent properties through changes in the interaction dynamics [4].

A lesson to take away from complex systems is that there is no one-single-correct model of societal interaction. Even if we knew in detail the interaction paradigm, it was a fixed parameter (social interactions of the atomic actors did not change) and the world was in fact strictly deterministic, this would not give us a social theory where we can predict outcomes. There is no positivist or naturalist method with which to proclaim the inevitable “march of history”. It is both computationally and methodologically irrelevant.

So what then can we take from complex systems theory in terms of application to our thinking on human society and revolutionary change? We know from the areas of empirical research in the natural science, and from historical information that radical paradigmatic changes are actually a very natural behaviour even though they are largely unpredictable. Revolutions in social order have occurred repeatedly throughout history.

There are several critical factors involved in the manifestation of genuinely new social orders. In terms of the generative events that create these changes, they happen by a process of increasing disorganisation or decay of the old order. This usually involves the injection of large amounts of energy into the old system. When these energetic events dissipate we have a solidification into a new order.

Symmetry-breaking is a common systems behaviour which is particularly interesting in the context of paradigmatic changes. Symmetry-breaking occurs when a system falls into one of two choices of lower probability based on small local deviations. The choice of which emergent behaviours are chosen canappear arbitrary to an external observer. In fact it starts from small internal fluctuations in the behaviour of the system.

Anarchist communism, when expressed in relation to complex systems, is a description of both the emergent and the individual behaviour. It requires behaviour at the global level with communism and mutual-aid among communities, as well as cooperative and collective decisions and solutions on the scale of the problems that face us. At the same time it asks for the removal of hierarchy and coercive power relations down to the level of individual actors.In the framework of complex systems, anarchist communism actually looks like it has very good chances for survival. It posits a non-hierarchical network model as a starting point for human organisation. This means it has a theoretical capacity to display complex emergent behaviour.

Additionally the role of the revolutionary organisation can be seen to be critical to the preservation of the libertarian quality of the revolution. Small fluctuations in a revolutionary situation can have disproportionately large impacts. The kernel of the new society will exist in the tendency of the organisations whose characters lend themselves to the movement. It is therefore critical that the organisationaltendency have the structural integrity and replicable knowledge of interaction dynamics required to crystallise the broader movement into one with a libertarian communist character.

Tactically, the use of complex systems thinking for analysis leaves as many questions as it answers. From this perspective many sorts of emergent behaviour will not be calculable a priori, but must be decided from empirical study or the weaker method of attempting to find appropriate historical analogies. We are left with complicated problems. We must find solutions in which tactical methods best enable escalation of class struggle. Additionally we must find the internal structures that are most scalable and replicable such that they can quickly be effected during the heightened period of sensitivity that occurs in the revolutionary moment.

Intractable - Problems that can be solved in theory, but not fast enough for the solution to be usable on human time scales.

Reductionism - An approach to understanding the nature of complex things by reducing them to the interactions of their parts, or to simpler, more fundamental things

Neo-Classical economics - A general approach to economics focusing on the determination of prices, outputs, and income distributions in markets through supply and demand.

[1] The Phenomenon of Science. Valentin Turchin