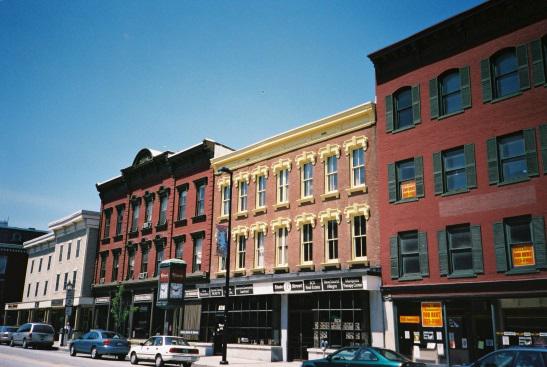 Montpelier VT, October 2003- The Vermont Workers’ Center, in collaboration with the United Electrical, Radio, and Machine Workers (UE –who recently organized Montpelier’s Hunger Mountain Food Co-op), has gone public with a now several month old campaign to organize a general union of Montpelier workers.[1] This campaign seeks to gain union representation and recognition in every single shop, the majority of whom are from the service and retail sector, in this capital city (population 7800). For the last few months the drive has been furthered by the formation of an organizing committee made of rank & file workers from dozens of distinct shops. The union seeks to gain fair wage increases (with the goal of achieving livable wages), job security, and more democracy for all area workers. As of print, management has come out in support of voluntary recognition at Charlie O’s Tavern.[2] Additional shops, such as the Savoy Theater are seriously considering recognition as well.[3] Workers from La Pizzeria, Karma Imports, and the State Street Market have requested recognition of the union as well.

However, it is clear that the unionization of the entire city will not be won without a fight. At J. Morgan’s, a downtown restaurant of more than 40 workers owned by the Bashara family, management, in addition to attempting to intimidate, bribe, and harass the staff, has brought in a union busting firm to aggressively seek to disrupt the efforts of the majority of employees who have come out in favor of the organizing drive. This being said, the general support of the union is clearly growing as workers are coming to understand the benefits and need to have a democratic organization which advocates for their interests; an organization which is owned and controlled by the workers themselves.

In an interview with CT News, James Haslam, Director of the Workers’ Center said, “The bosses and the employers are well organized. They have the Chamber of Commerce and Downtown Business Association. The workers need their own organization… When workers form a union they are able to have the space to get together to figure out how to address issues which affect them. In Montpelier they are starting to not only discuss specific workplace issues of fairness and equitable treatment, but also things that transcend these specifics, like healthcare [coverage], parking for workers, and affordable housing.”

This union drive must be understood in the correct context. The fact is the relatively well paid manufacturing jobs, many of which were unionized, have been leaving Vermont in great numbers as a result of NAFTA and so called free trade. In this last year alone hundreds of jobs have left the Green Mountains. In turn the new jobs that are being created are largely in the service and retail sector, and generally pay well below a livable wage (which is presently defined as $11.60 an hour) and very few carry any benefits such as healthcare of dental coverage. It is such service and retail jobs that employ hundreds of Montpelier workers. Therefore, it should be no surprise that employees from Vermont’s fasted growing sectors are coming together in order to win a dignified and sustainable life based on the labor that they perform. As such, the efforts of the pro-union working class in Montpelier must be viewed as a step forward both in terms of expanding the functioning bodies of democracy, and in terms of achieving directly democratic socialism within the rugged geography of the Green Mountains.

[1] This article was first published in Catamount Tavern News in 2003.

[2] Charlie O’s was and continues to be a working class, biker oriented tavern on Main Street. Recognition would never be achieved there as the owner (unlike his local manager) soon came out firmly against the union. In fact, as time passed, I [David Van Deusen] became a bartender at this tavern. I was eventually fired without cause within 24 hours of being quoted in the local newspaper as being a spokesman for the union (in opposition to a proposed regressive option tax – which was ultimately voted down). While a union efforts failed to get me reinstated, 75 local patrons organized a one night tip-strike against the manager (who also bartended). On this same night, with nearly all patrons wearing ‘Bring Back Dave’ stickers, a fellow bartender names Mo (who recently resigned) also threw a glass at the manager’s head (which missed, smashing behind the bar), and patrons (including KW) poured beer on the pool tables. “Bring Back Dave” was also carved into the wall of the women’s room with a knife.

[3] A union contract was soon signed at the Savory Theater and Downstairs Video.