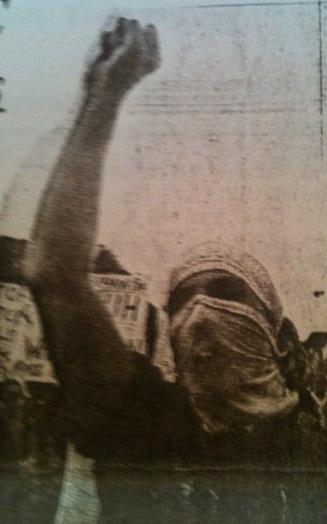 A coalition calling itself “Not On The Guest List” organized a march on the Democratic National Convention [Chicago 1996] in solidarity with domestic political prisoners. [1] Participants included Vermonter David Dillinger (Chicago 7) and Dennis Banks (American Indian Movement). The march was supported by a several hundred strong Black Bloc [largely organized by the Love & Rage Revolutionary Anarchist Federation]. The procession of protesters quickly strayed from its approved parade route so as to pass directly through the heart of a Chicago housing project. There it picked up hundreds of local supporters. Upon entering the “security zone” surrounding the United Center (site of the DNC) the protesters were met with hundreds of police (pedestrian and mounted) which blocked their entrance to the convention grounds. Thousands of police in riot gear were warehoused just blocks away.

At that point Dillinger led a sit-in across an intersection [in front of one of the convention entrances] while elements of the anarchist bloc formed a protective and confrontational counter-line to the police line [which faced it]. The police dared not break up the rally; the [anarchist] counter-line was not challenged and the protest continued.

After a nearly two hour stand-off, the ‘official’ leadership of the march decided to call for an end of the protest. David Dillinger proclaimed “We have proven our point. Let us go home and protest again tomorrow.” With that many, including those sitting across the intersection, left. On the other hand, anarchists and local supporters from nearby housing project refused to give up their counter-line or the streets.

Hundreds of people held the streets in the vicinity for several more hours into the evening. At one point a large fire was lit in the road. An American flag and cardboard effigies of prisons were burned. Still the police dared not attack the protesters (the world was watching…).

Eventually the number of protesters grew dangerously small. With this realization the anarchists (who were the bulk of the remaining demonstrators) marched in unity several blocks away. There they can in contact with a multitude of delegates seeking to leave the convention on busses. Without hesitation these activists (now numbering a couple hundred) blocked the streets a prevented the busses from moving. All this occurred while angry chants of “FREE LEONARD PELTIER, FREE MUMIA ABU-JAMAL, FREE ALL POLITICAL PRISONERS, END CORPORATE WELFARE, SMASH THE FASCIST STATE, were echoing through the crowd.

As police began to arrive in large numbers, the demonstrators swarmed through the streets in a frenzy in the direction of downtown (which was about a mile away). Following a change of mounted police, the group became divided. Out of the mayhem a group of 50 regrouped and continued marching on the city. Police kept vigil but did not block their passage.

For this bloc of 50 the first stop was the former sight of the statue commemorating the police who were killed at the Haymarket incident in 1886. The statue was blown up by the Weathermen to open the Days of Rage in 1969, and blown up again by the Weather Underground in 1970. There the protesters spent several minutes paying respects to their comrades in struggle who came before.

Next, the group came across a restaurant which was playing host to a DNC delegate/congressional party. There they verbally brought their message of discontent to party goers. Following the mass arrival of police, the protesters moved on.

The demonstrators continued to Michigan Avenue (the Art Institute) where JFK Jr. was holding an event for his Democratic cronies. The protesters, now massively outnumbered by police, attempted to storm the party but failed. Their attempts to break police lines resulted in several grappling contests between them and the pigs. The anarchists did however manage to taint the Democrats made-for-tv evening by vocally and visually putting forward a voice of opposition to the capitalist ruling party and showed that The People can and do have the desire & ability to bring their message to the streets.

An hour after arriving on the scene, obviously exhausted by the days and nights events, the anarchists decided to break down into small affinity groups and quickly vacate the area in order to meet at a secure prearranged location to further plan actions for the following day(s). No official arrests were made.

48 hours later law enforcement illegally raided the Counter Convention (in retaliation?). Throughout the day police swept the city and made close to 20 arrests of suspected activists and leftwing sympathizers. Three people had to be hospitalized as a result of this police crackdown on freedom of expression. A law suit is presently [1996] being organized against the City of Chicago.

[1] This article was first published in the Fifth Column Press, Marlboro VT 1996. Fifth Column Press was briefly the leftist publication of a group called The Liberation Movement which I, David Van Deusen, was a member of while attending three semesters at Marlboro College, Vermont (1996-1997). Fellow members/participants of the Liberation Movement included, among others, David Croken, Tino F., Katie S., Ariane B., and Parisa “Dove” Norouzi, (who went on to co-found Empower DC). The march depicted in this article was the first where I masked up. I marched in these rallies with my cousin Chris P. who is now an IBEW Union Steward. Truth be told, during a later day in the protests, myself and Chris P. ran down an uncle, P.B. who was in town as a Democrat to actually attend the DNC. For one night we called a political family truce; P.B skipped out on the convention, and Chris and I skipped out on the protests. Together we instead took part in cold beer and hotdogs at a White Sox game. America’s pastime aside, 20 years later I continue to see these days of action, no matter the small scale, as the direct predecessor of Seattle and A16 (if nothing else on a personal level).